Exh 1: Web-3 seeks to move the internet towards a decentralized, permissionless, network, that promises privacy and rewards user participation 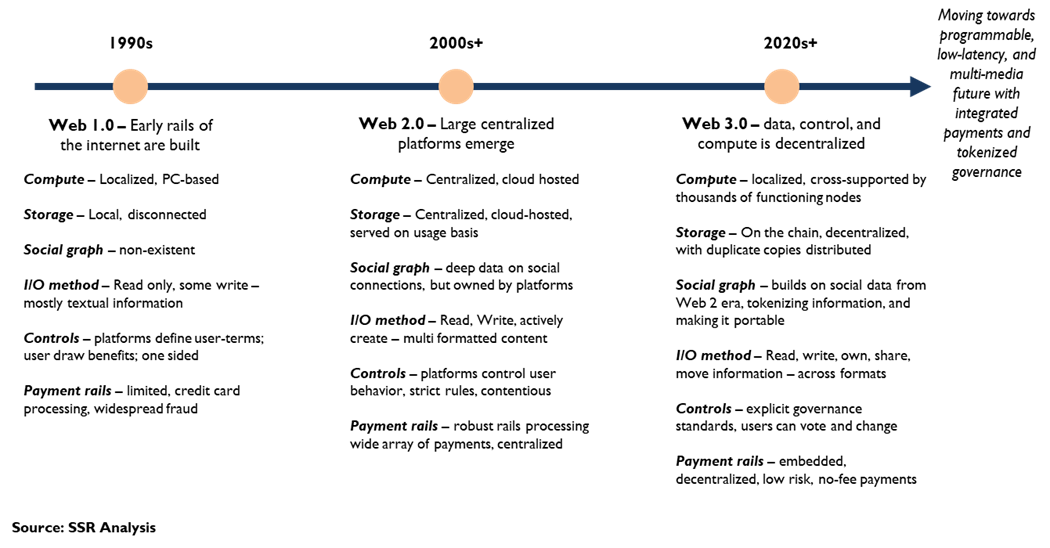 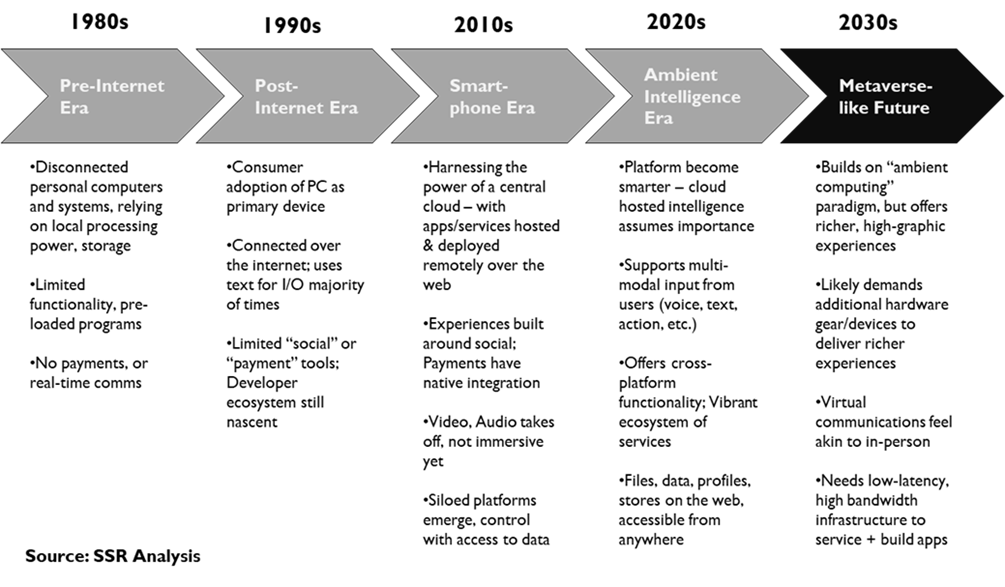 Predicting the future is a difficult thing. A survey of vintage science fiction is instructive. Humans have still traveled no further than the moon and we stopped doing that nearly 50 years ago. We haven’t cloned dinosaurs or created them from nuclear explosions. No one has real superpowers and while our reality if far from perfect, it’s a far cry from dystopia in most corners of the world, even if the “Experimental Community of Tomorrow” (EPCOT) is neither experimental nor a community. Still, imagination is a powerful force.

This is the case in the tech world, where the building blocks of whatever the “community of tomorrow” will be built from are being built. Amongst the Silicon Valley cognoscenti, there are two “next big thing” visions for the future competing for attention (Exhibit 1, 2). In one corner we have the “metaversers” led by frequent Capitol Hill testifier Mark “Zuck” Zuckerberg, who just renamed the company he founded from Facebook to Meta Platforms to confirm his dedication to concept. The Metaverse is a term coined by science fiction writer Neal Stephenson in his 1992 dystopian novel “Snow Crash” and refers to a deeply immersive, intuitive, and comprehensive digital world where humans can live much of their lives as avatars. We recently wrote about this. (Metaverse Archipelago: A Quest for the Holy Grail) Meta Platforms is investing billions of dollars in immersive interface technologies like virtual reality devices and augmented reality goggles in hopes of beating everyone else to the punch and dominating this metaversal reality even more thoroughly than it dominates social media today (Exhibit 3). However, other metaverse acolytes, like Apple’s Tim Cook, Epic’s Tim Sweeney, Amazon’s Jeff Bezos, and Roblox’s David Raszucki, are racing to beat Zuck into the pool. 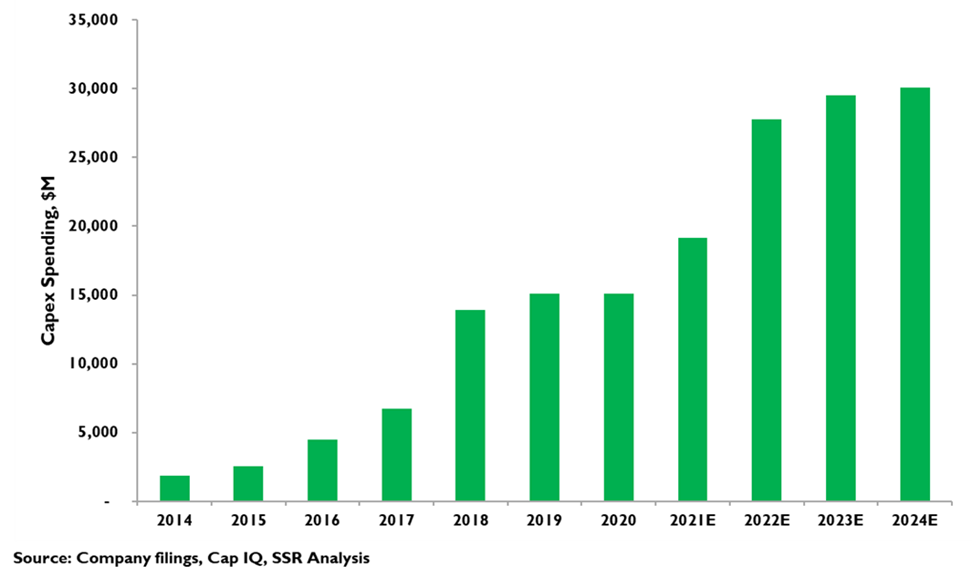 In the other corner, we have the “blockchainers”, led by digital gad-about Jack “@Jack” Dorsey, who just stepped down as CEO of Twitter to devote his full attention to his other CEO slot at the fintech giant Square, which he promptly renamed Block in tribute to his own obsessive vision (Exhibit 4). The blockchainers tend to be younger than the metaversers, with a vast array of VC funded startups rallying to a rough concept called Web3. We have also written of Web3 (Web3: Vision vs. Reality), a blockchain-based concept for a distributed internet that – if it works – would cut out the role of platforms as aggregators and publishers. The biggest proponents of Web3 tend to be the small developers (and the VCs that fund them) that would benefit most from the elimination of powerful centralized platforms (like the ones that are lining up to build metaverses). There are a few other well-established companies besides Block and Twitter on the Web3 bandwagon. Coinbase, PayPal, Stripe, DocuSign, and others – mostly fintech names – are investing toward a blockchain dominant future. 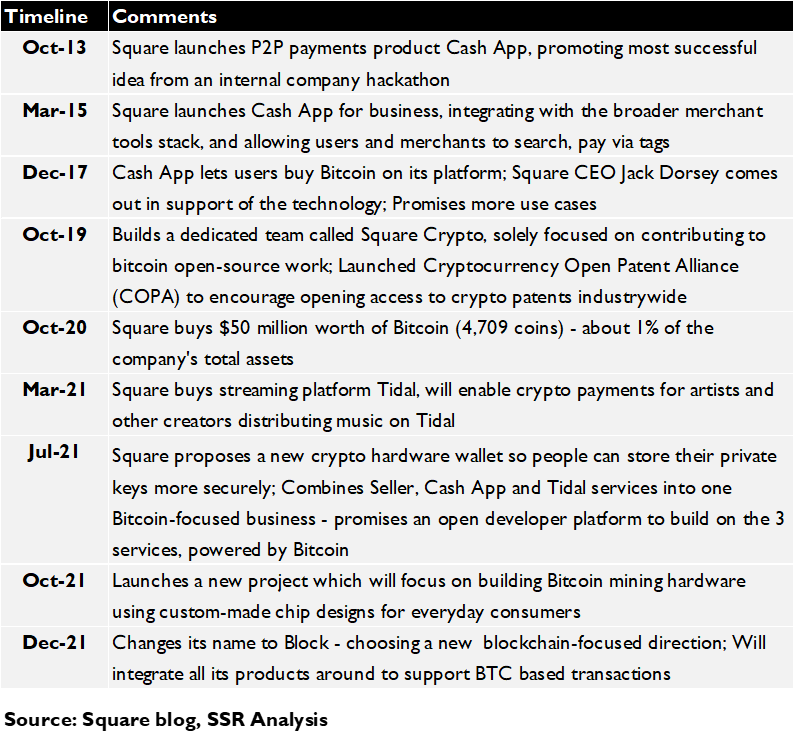 Of course, the government referees for the blockchain vs. metaverse bout are not particularly keen on either of the teams winning. On the Web3 side, privacy is handled by anonymity and authenticity is assured by a software technique that makes it impossible for anyone but the owner of a bit of content to alter it in anyway. Unfortunately, these features play havoc with law enforcement, taxation, and censorship of material deemed inappropriate. Few governments would be willing to allow such a network. As for the metaverse, antitrust regulators are not happy with the degree of control wielded by the big tech platform now and are not about to allow the same cast of characters solidify their hold by pulling consumers into a digital theme park. We imagine there will be significant roadblocks erected should either camp make progress toward their end vision.

In addition, both Web3 and the metaverse lack clear standards for interoperability. It would hardly be a reasonable follow on to the current internet if applications couldn’t interact with one another and users had to employ a variety of access methodologies to get to them. However, with the stakes around those standards perceived as sky high, negotiations over those standards are bound to turn acrimonious. Indeed, the internecine warfare around standards for smart home controls and industrial internet of things protocols have kept those potentially lucrative sectors in stalemate for near on 20 years.

There are also some pretty substantial technical obstacles for both concepts on the way to presumed ubiquity. For the metaverse, virtual reality is probably doomed – somewhere between 20% and 50% of the population is prone to something called “simulator sickness”, a syndrome first noted in fighter pilots training on flight simulators but also occurring in VR gamers. Essentially, if a person’s eyes signal motion but the inner ear doesn’t feel it, users get sick after a short while, kind of like reverse seasickness. There doesn’t seem to be an electronic way around it even if more than a small cadre of users cared to tether themselves to a computer without a glimpse of the real world around them. (Hint: They don’t)

Augmented reality – projecting digital images into a user’s field of view using special goggles – is far away from the eyeglasses form factor that has been promised. If you are talking about 3D, full color, moving images across a wide field of view (and that’s what metaverse proponents are suggesting), you are talking about heavy goggles with at least 9 layers of glass in the lenses connected to a major powerpack at a $3,000+ price tag (Exhibit 5, 6, 7). The price will probably come down but getting to inobtrusive glasses will require major advances in optics, not incremental changes that could be driven by Moore’s Law. This will take a decade at least, and even then, it’s not certain that society won’t completely reject them as “creepy”. Note, this isn’t the only technical hurdle, just the biggest one. For the others, we have written about them here (Metaverse Archipelago: A Quest for the Holy Grail).

Exh 5: Summary of major hurdles for the adoption of a full-Metaverse

Exh 7: U.S. Military Studies historically indicate Simulator Sickness is common among users – which could be a hurdle to VR adoption 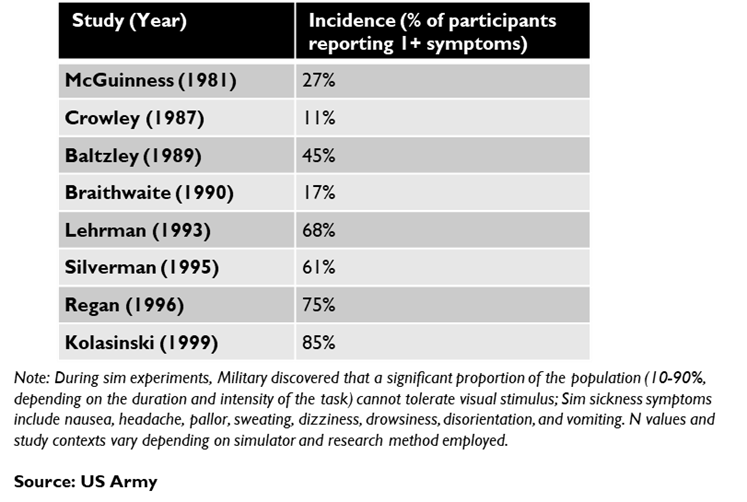 Web3 is no better off. Pure blockchains do not scale very well. Without a centralized authority, all aspects of the network architecture are essentially crowdsourced, including processing and storage. As the topology gets complicated, the overhead of parsing compute jobs and database maintenance across millions of user devices becomes overwhelming – look at the transaction settlement times for major cryptocurrencies. Fixing

Exh 8: Web3 has technical and social challenges that could derail adoption

Exh 9: Blockchain transaction settlement – the bigger the network, the slower it gets 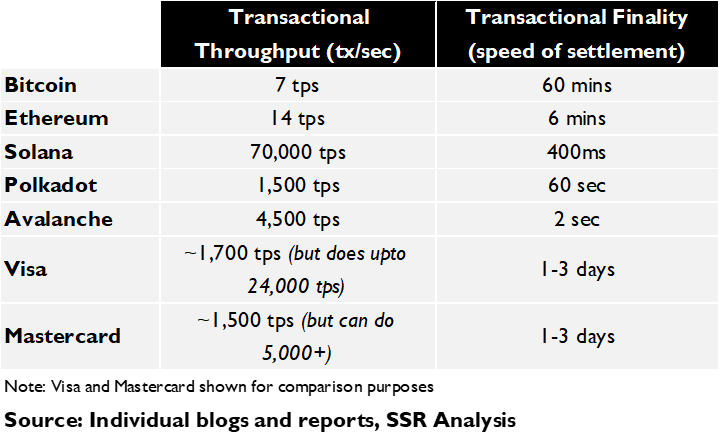 this requires anointing certain parties to the blockchain with the authority to approve transactions and activities without appealing to the community, essentially subverting the platform-free ethos central to the case made by Web3 advocates. Blockchains also ask a lot of user devices, possibly pricing out lower income users unable to upgrade to the processing and storage oomph required (Exhibit 8, 9). We go through all of this, and more in our note. (Web3: Vision vs. Reality)

Finally, we know what’s in it for the proponents of the two conflicting visions (Exhibit 10). Would-be metaverse architects are looking to lock swaths of consumers into a network environment so engaging that they never want to leave (and never want to spend their money anywhere else). Web3 applications (known as D-Apps, BTW) developers want to bypass the Apples, Googles, Facebooks, and government regulators of the world, along with the percentages that they take from the potential market. However, the benefits for users are much more ambiguous. It is not at all clear that most consumers would be comfortable in a society where nearly everyone was wearing glasses that fed them information about the world around them, even as they interacted with one another. It is also not clear that the mass of people are nearly so concerned with the anonymity and privacy afforded by Web3 that they would we willing to give up significant ground on application performance. The fact that nearly 3 billion people have accounts on Facebook is evidence that privacy is overrated.

Like many things proclaimed to be the next big thing – Sensurround! Holograms! 3D TV! Full Self Driving! – both the metaverse and Web3 could turn out to be duds. Perhaps more likely, elements of both will find their way forward, not as a replacement for the current internet but as add-ons. While we are skeptical that anyone will be visiting “The Metaverse”, “The Matrix”, or even the “Star Trek Holodeck” in our investible lifetimes, more engaging 2D interfaces will be coming along with increasingly intuitive applications able to anticipate user needs. Similarly, we believe government issued central bank digital currencies (CBDCs) based on blockchains will streamline many types of payments without volatility and scaling problems holding back crypto-coins from becoming realistic candidates for mass market transactions (also without that pesky anonymity so vexing to governments). Indeed, we see real promise for consumer wallets as a low cost, low friction threat to traditional retail banking.

While these islands of metaverse-lite and not-quite-Web3 could prove quite lucrative, we would avoid investments that promise the whole enchilada. Given how big and entrenched the current internet is in billions of lives around the world, it is not going to be that easy to replace it. Give it five years, and we will be all talking about quantum computers. 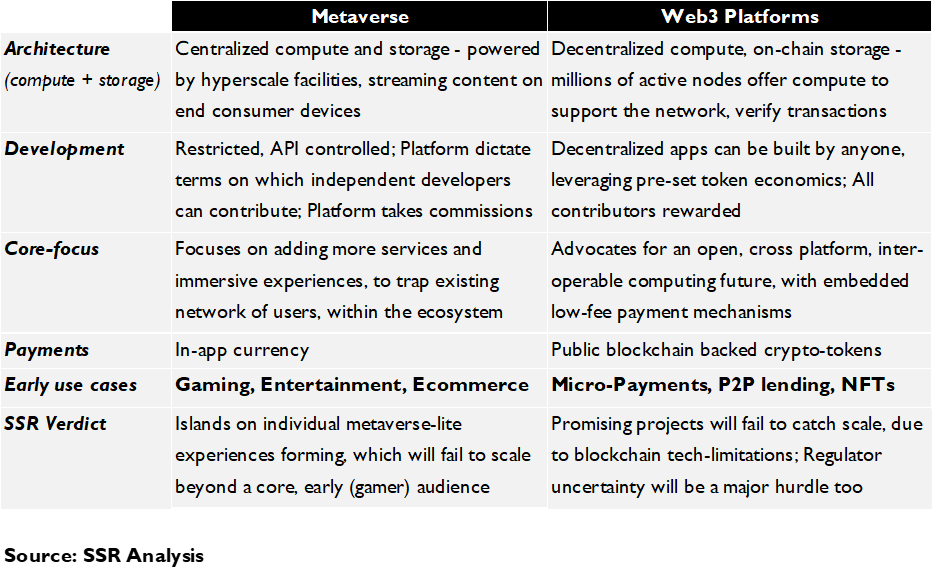